Not only is Sylvia Czubarow ’16 the founder of the Improv Club, a talented Rice Street singer, and a highly accomplished actress, but she is also currently tackling the challenge of directing a play, “Polish Joke,” all on her own.

The comedy “Polish Joke” will be shown at Wellesley High School’s Little Theater on May 19, at 3:30 and 5:00 p.m. Admission is free, but donations are appreciated.

Czubarow decided to direct the play as her senior project. The idea came to her in the fall when she took part in directing “Soap Opera,” written by David Ives. After she found out that David Ives also wrote “Polish Joke,” and that the high school had performed it before, she was determined to direct it herself.

The play chronicles the life of a Polish man, Jasiu, who is ashamed of his heritage because of all the stereotypes associated with it; consequently, he pretends to be Irish, changes his name, and ends up fleeing America. Themes of accepting one’s identity and taking pride in one’s country run throughout the story.

Czubarow’s responsibilities in directing “Polish Joke” are abundant. She had to cut down the script so that it fit a 30-minute time frame. She had to gather the cast together, select the music, provide most of the costumes, and decide when to change the lighting. On top of that, Czubarow also prepared for her role in “Godspell,” the spring musical.

She holds rehearsals for “Polish Joke” every other day when possible and works to accommodate all her actors’ schedules. “During rehearsals, we first start out with blocking the show to make everything sharp. Then we work on characterizations and break down the script with verbs, tactics, obstacles, etc.,” said Czubarow.

Others have noted Czubarow’s dedication, excellent leadership skills, and the enthusiasm she brings to her rehearsals. “Sylvia is thoughtful, passionate, and has a clear vision for her show,” said Theater Director Stephen Wrobleski.

Although there was not enough time for Czubarow to hold formal auditions for “Polish Joke,” she still found a cast that lived up to her expectations. “I chose people who I knew would fit the characters well, and they do!” said Czubarow. She also included underclassmen in the ensemble, asking anyone who wished to take part in it and who was willing to put forth the time and effort.

Celeste Amidon ’16 plays three different parts in “Polish Joke,” including the main character’s love interest. She enjoys the opportunity to have a variety of different roles in the play. “Sylvia and I are good friends, so I feel I can try new things and she will be supportive yet honest if they don’t work,” said Amidon.

With so many events in the drama department going on simultaneously, Czubarow and her cast struggled to pull everything together. Nevertheless, Czubarow is excited. “I’m most looking forward to the energy we get from the audience!” said Czubarow.

AP classes: Worth it or not? 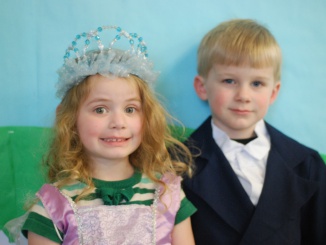