On November 8, 9, and 10, the high school Performing Arts department put on four shows of Monty Python’s “Spamalot”. “Spamalot”, a musical adapted from the 1975 Monty Python movie “Monty Python and the Holy Grail”, originally ran on Broadway in 2004 and won three Tony Awards including Best Musical.

The musical follows the adventures of King Arthur of Camelot and page Patsy as he tries to find the Holy Grail, a task given to him directly by God, accompanied by a dysfunctional cast of knights.

One of the most rewarding experiences Sullivan had while working on “Spamalot” was reuniting with her former drama students from her middle school productions. “There were so many kids that I have known since 6th grade. Working with them here, at WHS, was like coming full circle. It was such a joy,” said Sullivan.

This year’s choice of “Spamalot” is the polar opposite of last year’s fall musical “Sweeney Todd”. While the latter is the epitome of a classic musical with Sondheim ballads and a dramatic mood, “Spamalot” brings out the more eclectic and “zany” side of musical theatre as Sullivan puts it.

King Arthur’s sidekick Patsy, played by Sofia Ko ’19 and Alexa Kahn ’20, pointed out in one number that the characters are in a musical. This prompted the two of them to look out into the audience and greet the “Peasants of Wellesley”. The actors also break “fourth wall” when Arthur and his crew discover the elusive Holy Grail. The actors find the golden goblet under an audience member’s chair and call the lucky inhabitant of seat D101 up to the stage for praise and a polaroid picture.

“Spamalot” additionally differs from past fall productions in its size. Rey Hill ’19, the Props and Associate Scenic Director, says this production is larger than the last two shows they have worked on combined with in terms of cast and the work necessary to produce the show.

“The biggest challenge has honestly been the sheer magnitude of the show. There are 21 set pieces that we have had to construct and paint. There are about 83 kids in the show, and there are crazy amounts of dance and music rehearsals needed,” Hill said.

Although adapted from the movie created by the famed British comedy group Monty Python, the musical certainly lives up to the expectation of excellence associated with it. The musical is full of the John Cleese-esque humor, from tangents about tropical birds, to plenty of elaborate insults and physical humor.

Actor David Kelly ’19 who played King Arthur in the second cast enjoyed his role because of the humor of the show.

“I absolutely loved the role, being a goofy king was super fun and gave me a brand new acting challenge. It has been my favorite role I’ve played,” Kelly said.

Sullivan said the highlight of the show for her was the “Killer Bunny scene” where the knights encounter a vicious bunny and chaos ensues. She enjoyed this scene in particular because it made her “laugh the most”.

One of the greatest appeals of the musical for actors and crew alike is the community it forms. Kelly says his favorite experience from the musical was “all the time spent getting to know new people and making tons of amazing friends through the show.” 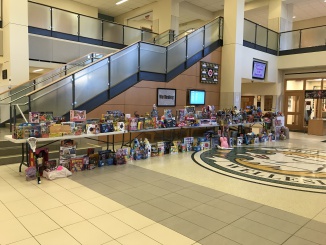 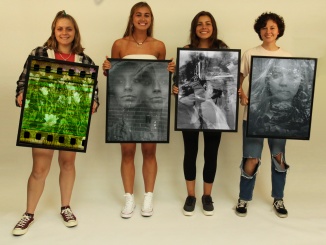 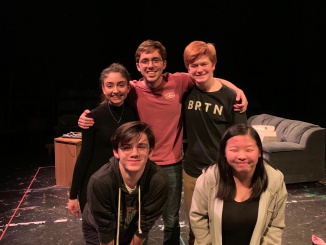 One Acts bring a variety of students together