Assigned the duty of keeping their schools safe and secure are the Wellesley Police Department’s school resource officers (SRO). Of the forty-strong department, two of them hold the title of SRO.

“We are lucky to have two exceptional School Resource Officers. Both Officer Rosenberg and Officer Poirier do an excellent job in their roles.  They are both a valuable asset for not only the police department, but for the students and the school department,” said Wellesley Chief of Police Jack Pilecki.

The Department of Justice (DOJ) defines School Resource Officers (SRO’s) as “sworn law enforcement officers responsible for safety and crime prevention in schools”. Today, the DOJ estimates that there are between 14,000 and 20,000 of these resource officers in schools across the country. But how, and when, did SRO’s begin appearing in schools?

In Wellesley, having SROs in schools is a fairly new addition. In fact, it’s only last year that the high school has had a full time resource officer. In the past, Officer Evan Rosenberg was assigned to cover the entire Wellesley Public Schools (WPS). Now, WPS has two full time resource officers for the 5,000 student strong district, one for the high school, and one for the middle school and all of the elementary schools.

“I think that kids got to know who I was, but they never knew how to find me,” said Rosenberg, referring to when he was assigned to cover the entire district.

Although the modern implementation of SRO’s is fairly widespread, as around 77% of schools with over 1,000 students have one, there are still mixed opinions as to their presence in schools. Many parents believe that a school is a place for learning, not a place for armed officers of the law. Some students have noted feeling scared or unsafe being in the presence of somebody, officer or not, with a gun. Additionally, some also believe that having officers in schools create a “School To Prison Pipeline”.

“The school-to-prison pipeline starts in the classroom. When combined with zero-tolerance policies, a teacher’s decision to refer students for punishment can mean they are pushed out of the classroom—and much more likely to be introduced into the criminal justice system,” wrote Marilyn Elias on Tolerance.org, an organization whose aim is to “educate children and youth to be active participants in a diverse democracy”.

Rosenberg added that, “There’s a lot of training I get as an SRO on this particular topic. SROs decrease the school to prison pipeline. It’s a benefit for students to have an SRO. Someone that knows that student, on a personal level, too. Not just encountering that student for the first time on the street.” said Rosenberg. “A lot of time I find myself advocating for a student who got into a situation on the street, because I know that student. I know who they are and how they are normally. A lot of times it’s the [school resource officer] advocating for the student.”

According to Rosenberg, resource officers were traditionally older officers with their prime days behind them. They usually opted for the school assignment because they wanted a slow, routine, 5 day a week commitment to wait out their last years until retirement. Nowadays, the position is occupied by many young and highly skilled officers, and Rosenberg says that the position requires a lot more than an old man awaiting retirement.

Although the traditional resource officer may have been an old officer far past his or her prime, Rosenberg, aged 33, is quite the opposite. Having played football all throughout high school, Rosenberg decided to attend Endicott College to continue his athletic career.

Even now that he is a police officer, his athletic ability has not deteriorated. Contrastly, Rosenberg regularly competes in triathlons and road races. In fact, Rosenberg is a finisher of an Ironman Triathlon, a 140.6 mile run/swim/bike event that takes over 10 hours of non-stop running, swimming, and biking to complete. In addition, Rosenberg is a finisher of several marathons, including the 2018 Boston Marathon. Suffice to say, Rosenberg is an accomplished athlete who takes pride in his physical condition, quite the opposite of the aforementioned “fat old man” stereotype that many other officers and some of the public may have about SROs.

Many SRO’s, including Rosenberg, emphasize that the training and selection of a resource officer is of paramount importance. Because of this, an improperly trained SRO can create many more problems than they solve.

The selection process for an SRO is rigorous and thorough. Rarely, if ever, are they hired directly from the streets. Most resource officers are skilled law enforcement officers with many years of experience. However, working in a high school is still a very niche work environment according to Rosenberg.

“The hiring of an SRO is very important. There are qualities that a good SRO needs,” Rosenberg said. “There are some really good officers that are good on the street, they’re good at traffic enforcement, drug enforcement, [criminal] investigation, etc, but they wouldn’t do so well at a high school, working with kids.”

For school resource officers like Rosenberg, no two days are ever the same. The job is constantly changing and the tasks he has to do are different every single day, he said. One day he may be teaching a class about drug prevention and the next he may be talking with a student’s parents about their child’s drug use. Unlike a patrol officer, a resource officer will also have to handle juggling several different roles, and wear many different hats.

“I’m a mentor, then there’s aspects of teaching, and there are times when I am a police officer and I need to keep the students safe. Luckily, in Wellesley I am more of a mentor,” said Rosenberg.

A Wellesley High School graduate of the class of 2004, Rosenberg takes his reputation very seriously.

“If people don’t like me and they don’t think I’m approachable, then I’m not doing my job right,” said Rosenberg.

In the end, for Rosenberg, it is the connection to his community that fuels him.

“Through working in Wellesley, I realized how beneficial it is to be a police officer in the town you grew up in. This is because of the natural relationship you have with the community,” he said. 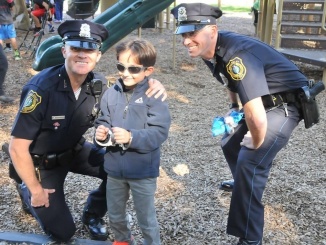