A French girl taps the sidewalk in Paris with her cane as hundreds of miles away, a young German boy sits in his attic bedroom, the inside of a radio spread out across his bed.

All the Light We Cannot See tells the captivating stories of Marie-Laure LeBlanc, a blind French girl, and Werner Pfennig, a German boy, two young adults who eventually cross paths on opposite sides of World War II. Published in 2014 and written by Anthony Doerr, the book is a must-read.

The novel begins in Paris, where a young Marie-Laure LeBlanc with quickly diminishing eyesight follows her father to work at the Paris Museum of Natural History, rumored to house a notorious jewel. Legend has it this jewel protects the beholder from harm, but kills everyone they hold dear.

Meanwhile, in Germany, Werner Pfennig grows up as Hitler rises. At night in his orphanage, Werner listens to French broadcasts on science on a radio he repairs by himself. He escapes his mining town when an elite military academy accepts Werner due to his uncanny engineering ability. As World War II intensifies, the army assigns him to a team that tracks radio signals broadcasting on illegal bands, and kills the traitors broadcasting to the enemy.

In Germany, Werner becomes more and more disillusioned with the Nazis. He is transferred to France, where he meets Marie-Laure on the night before the Allies land in France. Although they were only together for a short time, the two form a close bond.

This tale of two strangers connected through their shared experiences in World War II grips the reader with its vivid description, lyrical language, and complex and intriguing plotline. Through Marie-Laure and Werner’s interactions, Doerr outlines how, against all odds, humans attempt to treat each other with compassion.

All the Light We Cannot See is similar in its messages to other books about World War II, as among other themes, it centers around human nature and the destruction of war. However, Doerr does so with language that gives a reader a new perspective beyond the typical war hero on the front lines.

Critics agree that All the Light We Cannot See is a brilliant tale. Amanda Vaill, writer for the Washington Post, said “I’m not sure I will read a better novel this year than Anthony ­Doerr’s All the Light We Cannot See.” In addition, the book has racked up awards, winning the 2015 Pulitzer Prize For Fiction and the 2015 Andrew Carnegie Medal for Excellence in Fiction.

Overall, All the Light We Cannot See is a literary masterpiece that anyone who adores history or descriptive language will enjoy, begging you to “Open your eyes and see what you can with them before they close forever.” 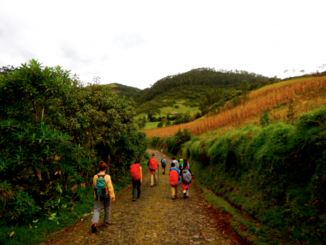