Quadriplegic Travis Roy to speak to students about values

In the eleven seconds star freshman hockey player Travis Roy saw the ice for the first time, playing for the powerhouse Boston University Terriers in 1995, his dream ended as quickly as it started. A traumatic injury would keep him from walking or doing virtually anything physically by himself anymore. It marked the end of his dream, his livelihood, and his passion. But in the aftermath of losing his passion, Roy found purpose. More importantly, though, Roy retained his values of love, respect, pride, and goals-setting.

Roy’s greatest challenge started after crashing into the wall while he chased after the puck during his 11 seconds of ice time in college hockey. Roy broke his 4th and 5th cervical vertebrae, an unanticipated and catastrophic end to his hockey career.

Roy will make his appearance at the high school on December 19 to share his story to students in hopes of influencing them to find their own values and purposes in life. He speaks frequently of his experiences all over the country, at colleges, high schools, and companies.

“I think there is value to what I’ve learned, and I try to share it so I can impact people’s lives to get them to think a little bit about what they want in life, how they’re going about getting it, and how they might get a little bit better at it.”

In Roy’s opinion, a vital part of life are having values and staying true to oneself, and he sees it necessary to establish values, passions, and purposes at the high school and college level.

“I’ve learned that people who know themselves the best are generally the most successful. I’m trying to get high school and college students to be thinking about that,” he said. “When you’re going through high school, it’s a lot of academics, ‘success,’ athletics and music… but it is every bit as important to figure out who you are and how you’re going to respond to different situations.” 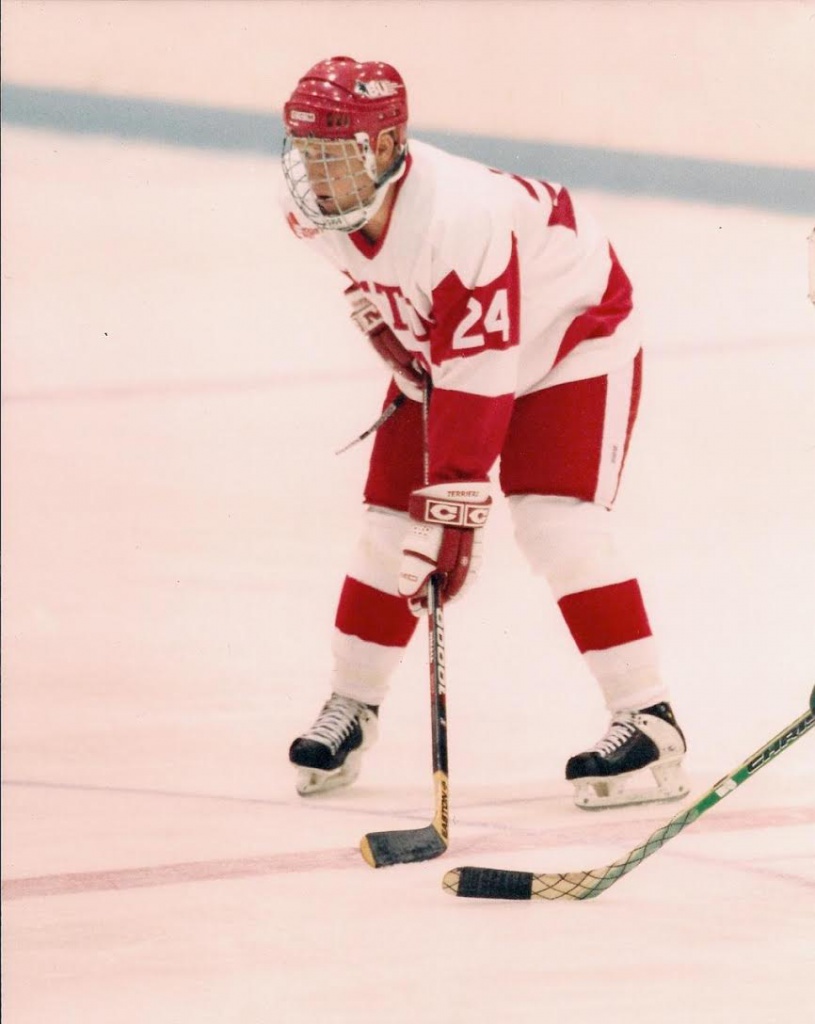 When he learned of the disability, Roy said that he felt sadness more than any other emotion, especially when acknowledging his disabilities, realizing he would never have kids, and handling constraining parameters each day.

“I miss the freedom,” Roy said. “I couldn’t finish my path and answer the questions I was seeking about how good of a hockey player could I be.” Even 21 years later, he still feels that sadness.

Roy acknowledged that remaining sad, hopeless, and ultimately purposeless after suffering his injury would be the easy route. Instead of doing so, Roy strives to make the best of his condition by moving forward and doing things that make him happy and enrich his life as well as others.

After learning his values and finding happiness after his injury, his perseverance began to positively impact people around the country. In 1997, two years after his injury, he founded the Travis Roy Foundation, which helps others battling spinal cord injuries. The foundation provides financial assistance to improve the quality of life for thousands of paraplegics and quadriplegics while providing millions of dollars for research for a cure.

Although finding a cure to those conditions is still likely years away, Roy sees the over $2 million in research grants as a catalyst to the process.

“It’s just really about hope, and hope is a good thing, but something’s got to fund it and make it real,” Roy said. “I have this purpose to add to that energy and add to the release and the independence for people that need these [operations], and it feels good. It gives my life energy, meaning, and excitement,” he said.

Roy split his life up into to two halves, with the first for finding his core values to rely on for decision-making and living with a passion. “The fabric stayed in place whether I was trying to make it to the NHL or I was trying to just figure out how to put a life together as a quadriplegic,” he said.

Now, Roy devotes the second half of his life after his injury to living out his own purpose for the rest of his life through his speeches and work with the foundation.

“I just want people to think about their own [values] and what’s going to make them really successful, but also what provides them with pieces of a passion or pieces of a purpose,” he said.

The speech Roy will give Monday morning falls under the umbrella of the fledgling Challenge Success program at the high school, in hopes of inspiring students to find their own paths to a meaningful future, while maintaining their passions and values.

A farewell to Mrs. Zinck and a welcome to Mr. Malone

What are the Massachusetts ballot questions for the upcoming election?