With 15 years of teaching AP Calculus and an assistant principal certification, Craig Brown has an unquenchable curiosity and an adamant drive to learn new things. He teaches math in the Evolutions program and has been chosen as the faculty member to deliver this year’s graduation speech. As he plans to return to teaching regular classes in the fall, Brown reflects on his time in Evolutions and looks ahead to his graduation speech, as well as the school year to come.

What led you to become a teacher? I went into teaching not necessarily because I love math, but because I really love teaching. I get a lot out of that give and take with another person that I absolutely love. I really like that relationship [of give and take] with kids, and I like that relationship with adults. I feel like other teachers who are open to new ideas, looking for things to explore, and don’t feel like they know everything are the teachers I’m best friends with here.

What led you to become an Evolutions teacher? I never feel like [my desire to learn is] quenched. That sort of is my driving thing. I always want to learn more things or do more things. In some ways that’s bad because I don’t specialize in anything. I’ve been teaching AP Calculus for 15 years, so I’m better at that, but most things in my life I don’t do for very long periods of time and become expert at them because something else catches my attention, and I pick up something else– another book, new people, things with my kids, something around my house I’ve never tried before. That expression “jack of all trades, master of none”, that’s kind of me. I’ve coached a lot of sports: soccer, baseball, volleyball. I was a varsity tennis coach at my old school. I’ve been involved in a lot of different committees; I did faculty senate for a bunch of years. So, when Dr. Chisum said ‘I’ve got this idea for a new program’, I said ‘Ok sign me up; this sounds perfect for me’.

What are some things you do in your role as an Evolutions math teacher that you couldn’t get as a regular math teacher? In my math classes, I would sometimes do projects, and I’d give a lot of constraints to them. The goal would be that [students] would use some math skill I just taught them, but the projects would be very boxed in, and I’d get 25 of the same project. I didn’t feel much learning happening. What I did in Evolutions more was ask kids what they’re interested in studying and give them more guidelines and really guide them in a way to help them continue that study.

The projects were really good and much more interesting, but they didn’t have that same rigor of math as they did in my classroom. Prior to Evolutions, I gave projects to kids and they didn’t have a lot of meaning. This year, they had a lot of meaning, but not a lot of rigor. My plan for next year is to give projects somewhere in the middle of having the rigor already, but [students] can develop the project themselves to explore that thing [which they are interested in].

What have you learned in Evolutions that you want to carry into the speech? What am I going to say at the speech? I don’t know.

[Planning the speech is] really tough, because who I am with the kids is someone who dialouges a lot. I make funny jokes in the moment. The relationship I have with a lot of kids is spontaneous and fun. This is an entirely different setting! I almost feel like ‘did they know who they were voting for?’ This is a monologue! Which, makes it a lot tougher to be that person, but I’m going to try.

What’s my one message? I’ve had a lot of ideas–nothing that’s really stuck yet. In Evolutions we’ve been saying a lot ‘it’s ok to fail’, and that’s interesting to me– be ok with your failures–but that doesn’t stay. I don’t feel like that’s what my graduation speech is going to be about. Every time I think of something, I think ‘oh that’s great’, and the next morning I go ‘that’s terrible; I can’t do that!’

What are some stylistic techniques you hope to include in your speech? I thought that something I would try to do to make it funny is to include musical quotes or movie quotes, but include them as a regular part of my speech so people will have to listen for them. [I hope] people will hear them and go ‘oh that’s that song, or that’s from that TV show from when I was a kid’. I want to work some of those in so that they’re not really private jokes — I never liked those — but it may be a joke so that if someone is listening, they go ‘oh that’s funny; that’s something that I know’, and they sort of listen a bit differently.

How will your own high school experiences play into the speech? What I remember about my high school speeches was not much. I remember sitting there thinking ‘when is this gonna be over’…. I really didn’t give that much thought to the people speaking other than that I was waiting for them to be done. That’s kinda one of my topics that I’ve been thinking about doing: ‘you’re probably not thinking about what I’m saying right now, and that’s ok, but… what?’ I don’t know.

Who have you looked to for speech-giving advice? My daughter is a junior in high school and she’s been giving me a lot of advice. I’ve talked to my students in class a couple times, and they have some advice too, but I don’t know what the speech will be yet. I’ve talked to Dr Cacace [who spoke at graduation last June], asking for advice, and it was really the same two things I had thought of myself. I didn’t know what my topic was going to be yet, but she said number one, be yourself. Kids voted for you, they want to see you yourself. Don’t try to look for other speeches or what other people are doing. And number two, decide what’s the one thing you want to share with the kids. Put those things together, and that’s your speech.

Will you miss Evolutions? What are you looking forward to for next year? Dr. Chisum said ‘anytime there’s a conflict, there’s some opportunity in it’, so I think this is the conflict: I won’t be doing Evolutions next year. So, what’s the opportunity? What other type of interdisciplinary things that we can do? I have no idea what that will look like, but I am looking forward to trying to have a bigger impact on more than just the Evolutions kids. 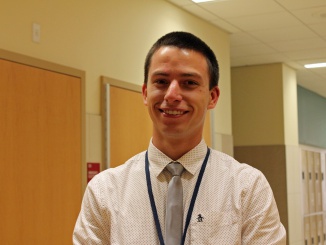