The Bradford’s Print Editor-in-Chief sat down with English teacher and music lover Mr. Alan Brazier to talk about Brazier’s favorite bands, music then vs. music now, the five-album test, and more. Here is their conversation.

This interview has been condensed and edited for clarity.

Zach Miller: How long have you been into music?

Alan Brazier: I had a brother who was 5 years older [than me]. He really introduced me to what I consider good music when I was when he was a teenager. So I was 10 or 12 and this was about 1980. The early bands that he got me into were the Clash and then a couple years later REM. So it was a lot of British alternative, and I’ve been branching off and getting into different types of music ever since.

ZM: What genres would you say are your foundations?

AB: A little bit of everything, honestly. The big one is alternative. Other early bands that I listened to where the Smiths, and the Cure, and bands like the Pixies, Dinosaur Jr., Elvis Costello. My favorite song by Elvis Costello is ‘I don’t want to go to Chelsea’. Whenever I drive by the city of Chelsea I sing that song at the top of my lungs.

ZM: So what other genres are your favorites? Is it just alternative?

AB: No, I really like all types of music. A certain type of music can fit my mood at a certain time. I mean, my most recent iTunes purchase was the essential Yo-Yo Ma. I like some classical, I like some country, you know, some hard rock, maybe even some heavy metal. So yeah, honestly it’s a little bit of everything. I mean, I’ve been getting into Van Halen recently, listening to a lot of Van Halen.

ZM: Would you say there any genres that you don’t listen to?

AB: Speed metal, death metal, really kind of ‘pop country’. I like country, though. The band that really kind of got me into country was The Civil Wars, who I think are extraordinary. And I’ve also really liked Lyle Lovett for a long long time. The slightly more alternative country I like.

ZM: Do you have any favorite bands? Like a band that you will listen to at any time? Or is it just a lot of equal favorites?

AB: I have a lot of favorites but the two biggest are REM and The Smiths; I will always go back to them. The other thing that I will mention is that really in the last decade I’ve loved the genre of that very kind of ‘American’ rock — although they’re not all American — you know bands like Mumford & Sons —

AB: — The Avett Brothers, all those great kind of Bluegrass-inspired bands. I think it’s been a fantastic trend in music, although I think it’s slowing down now. My favorite — my friends are sick of me talking about this — but my favorite album of the last year is the latest Lumineers album, [Cleopatra], which I think is extraordinary. [It’s] one of the best full albums that I’ve heard in a long time because it’s not just a collection of singles; it’s an album. And I grew up listening to records: like putting the record on the record player, and the needle, and listening to a full side of music. So I do appreciate a well-constructed album and not a collection of hits, a collection of singles, which I think is the way a lot of music is these days.

ZM: Did you like when Mumford & Sons changed their sound?

AB: Well I really appreciate it when bands evolve, because I think if Mumford & Sons just had put out the same type of album I think that that would have been tragic. At the same time, I haven’t been as into them [recently] as the first two albums, particularly their first album.

ZM: I heard from people who were in [Diverse American Voices] last year that you love [Kendrick Lamar’s 2015 album] To Pimp a butterfly —

AB: Oh, yes I do. It was my class — it was Diverse American Voices — and early in the year a couple of my students as we were talking about these issues of race in America [said] ‘Mr. Brazier you’ve got to listen to Kendrick Lamar’, and I had not heard of Kendrick Lamar —

AB: Yeah. And now I really want to go back and listen to his earlier stuff. And you know, that’s another genre of music that I’ve liked for a long time. And I keep on finding these artists like Kendrick Lamar that I just find really creative. You know, I think he’s unbelievable. My basis in Hip-Hop starts with like early 1990’s A Tribe Called Quest, De La Soul, those were the [groups] that were big when I was in college. And I’m always looking for things that I should listen to — I love to get suggestions from students.

ZM: Okay, I don’t mean to put you on the spot here, but my friends and I were doing this recently: it’s the five-album test. Say you’re stranded on a deserted island for the rest of your life and you can only bring five albums with you — what are the five albums you would pick?

AB: Number one is easy: [The Beatles’] Sgt. Pepper’s [Lonely Hearts Club Band]. I know it’s not out there as a choice, but I can’t deny it.

ZM: I’d go with [The Beatles’] White Album, but that’s just me. Picking a favorite Beatles’ album is impossible, though.

AB: Alright, I’m going to need to think about this for a little bit, but I’m not going to overthink it…Number two I’m going to go classic rock again: it’s Pink Floyd, The Dark Side of the Moon. Three would be Automatic for the People by REM, which is my favorite REM album by far. Four would be The Queen Is Dead by The Smiths and five…Oh, crap…See I’m tempted to choose Cleopatra by The Lumineers, but I feel as though I really need albums that stand the test of time. I’m going to go to classic again; I’m going to say Bob Dylan…

AB: No, I’m not a big fan…it would be Blood on the Tracks. I feel pretty good about those 5.

AB: Well, I refuse to believe that the world of music is falling apart, because I think there are still musicians out there that are making really great stuff. I do mourn the loss of the album; I do not like auto-tune; I don’t like that it’s so hard for new and really creative bands to get record deals and to get noticed. And maybe it’s just we’re at the beginning of something just entirely different in terms of what I’m used to. But I don’t think bands get rewarded for creativity [anymore]. I really think, though, that as long as there are guitars and kids who are putting chords together in their bedrooms, there will always be good songwriting — it’s just really hard to find.

ZM: What do you think is your favorite era for music? There are a lot of pretty defined ones — you said you grew up in the early 1980’s —

AB: The Ramones were great, The Minutemen, Hüsker Dü, —

AB: The Sex Pistols…it was all just a reaction to the Reagan Era that inspired a lot of great music. It wasn’t particularly wildly popular at the time but I think it was really good music.

ZM: What are some bands that you listen to that you feel not enough people listen to? Like, to all the five people who read The Bradford, what are some recommendations for things that they haven’t listened to?

AB: That’s tough. This is the hardest question yet…Well, I’m going to give you an example of someone, but I think a lot of times when bands become popular, you know, they have their shelf life and they play their time. And then musicians continue through and they age and they get older and if they do a good job they continue making good music. People might know the goofy 1980’s Australian band Men At Work; you know, ‘Down Under’ and songs like that. They were fun — I loved that music. But their lead singer, Colin Hay, went on to be a really good singer-songwriter for decades and I saw him a few years ago perform in Natick and he was unbelievable; he was fantastic. And you know, he’s reworked some of his old Men at Work hits and written a lot of new stuff as well. It’s just been really good and I think sometimes, you know, you’ve got to give artists a chance like that. And if you can allow them to grow and still listen to them and not expect them to be what they were like 10, 20 years ago when you listen to them, you could be really surprised. Another band that I don’t think really got very popular, but they’ve been one of my favorite bands, is a band called Tired Pony. It’s kind of a supergroup. It’s the guitarist from REM, a number of [other] well-known musicians. They never really made it big, but they’re just a great Indie-folk-alternative country band. [The lead singer] is Gary Lightbody, from [the band] Snow Patrol. I think everyone should listen to Tired Pony and not enough people do.

ZM: What’s the most recent song you’ve listened to by yourself? 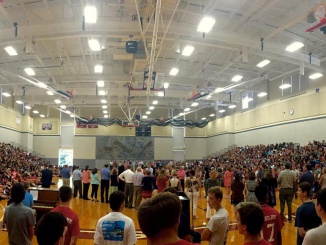 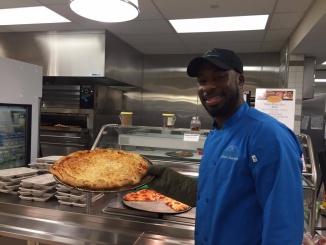 Faison changes the culture of the kitchen 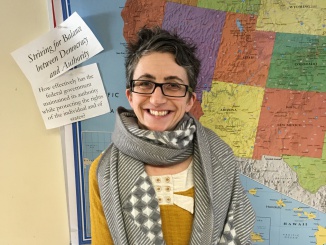