Most students’ ideal amount of sleep is just “five minutes more.” However much rest we get each night, most of us struggle to get out of bed each morning. Despite how tired we feel, what matters is that the sleep we get is enough to keep us awake and alert during the day.

Students at the high school, however, are quite fortunate in that they have the relatively late starting time of 8:30 A.M. on most days. This gives many students a sufficient amount of sleep each night and an alert and attentive mind each morning.

The high school’s somewhat complicated morning schedule is what makes it so great. While regular classes start at 8:30 A.M., with the exception of mandatory science labs or guidance seminars, students can choose electives that start an hour earlier, such as the Symphonia orchestra, child lab, and double block ceramics intensives. What’s more is that students who have extra space in their morning schedules can cancel study halls and start classes at 9:30 A.M. Juniors and seniors have the freedom to leave the school premises during free blocks, which means they can arrive late, go out for lunch, and leave school early, schedules permitting. This structure is a huge advantage to students at school because its flexibility works around students’ individual schedules.

Although individual schedules may sometimes make it impossible for all students to get enough sleep every night, the starting times at the high school are satisfactory because their adjustability allows many students to have a sufficient sleep while letting students do their homework and extracurricular activities.

Those who argue for later start times often reference morning sports like hockey, which begins at 6 A.M. in the morning, as well as METCO programs, where students have to get up at early hours in the morning arrive at school. According to Judith Owens, the director of the Center for Pediatric Sleep Disorders at Boston Children’s Hospital, teenagers’ lowest point of alertness in a twenty-four hour cycle is at around 5:30 A.M. to 6:00 A.M.

“Sleep is not optional. It’s a health imperative, like eating, breathing, and physical activity,” said Dr. Owens. “Some kids are exposed to the same degree of sleep loss for four or five years…This is a huge issue for adolescents.”

Lack of sleep, research has shown, leads to poor academic performance, deteriorates health, increases chances of early morning car crashes, and even leads to depression in severe cases. But even though some students may benefit from later starting times, it is impossible for schools to cater to all students’ individual schedules. Rudy Pikulik ’16, Student Congress President at the high school, says he thinks that the current school scheduling times are better than a later start.

“The timing of 7:30-8:30 start times makes it easy for parents who work to get their kids to school before the work day and pick them up after, which might not be the case with a later start time,” said Pikulik. “We have talked within our own body and with the administration about later start times before, but came to these points every time,” he said.

On a similar note, the American Academy of Pediatrics recommends that schools should start no earlier than 8:30 A.M. The high school already starts at the research-recommended starting time.

One could argue that schools should always start at 8:30 A.M., but earlier morning periods are necessary to fit in extra work, practices, and meetings for students who need them. Besides double block labs, morning classes are often taken out of students’ own volitions. Our current schedule makes it viable both for students to get enough sleep and for students to fit more classes into their schedules if they want to.

“Although it is not possible for everyone, I average about eight hours of sleep a night and a well balanced schedule can work healthily within the constraints of school,” Pikulik said.

At the high school, starting times are, for the most part, quite satisfactory. While early morning classes and practices may take away from the recommended eight to ten hours of sleep teenagers should be getting each night, these programs are usually not mandatory and must be worked around. By and large, the high school starting times allow students the recommended amounts of sleep and are late enough in the day for students to be awake and alert enough to participate in their classes. ’ 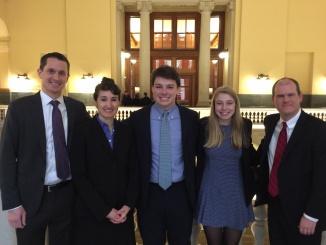