High school’s a place of learning and growth for most, but for senior Chris Mykrantz, it is more than that. It is the place that facilitated his passion for acting.

Mykrantz began acting in fourth grade, when he played a grasshopper in a fables project.“While that was more mandatory, it introduced me to what acting is,” said Mykrantz. “In middle school, I really began acting as an extracurricular mainly just so that I could make people laugh.”

During his freshman year of high school, Mykrantz took a brief hiatus from acting and joined the cross country team. “My first year of high school, I never actually planned on auditioning or participating in any of the school plays,” said Mykrantz. “It wasn’t until the winter of freshman year, after seeing a few friends in the One Act plays, that I took a serious interest in acting.”

The winter of his freshman year, Mykrantz auditioned for the winter show, and in the spring, he tried out for the spring musical. “I was still determined to keep running and actually stayed on the spring track team during the musical,” said Mykrantz. “Even though I was a freshman, I found it extremely difficult to balance my time.”

After his freshman year, Mykrantz chose to devote his full attention to acting. He has participated in two fall musicals, four self-scripted winter shows, three spring performances, two years of Improvisation troupe, and two One Act performances. He also is a teacher’s assistant (TA) in Acting One class and has directed a One Act.

This past year, Mykrantz’s One Act, Naomi in the Living Room, won the high school One Act competition and at the Emerson One Act Festival, Mykrantz won an award for acting.

“It was an incredible experience to sit in my chair and watch my cast go on up on stage,” said Mykrantz. “The high school’s theater director, Wro, always talks about how you get really stressed when you’re watching the cast perform, and I never really understood that until I watched my own cast perform, it’s your responsibility and it’s your work but you have no control once your cast gets up there.”

Mykrantz’s actors noticed his dedication to the script, as well as his optimistic and easygoing nature, and attribute it to the play’s success.

“He gave us a lot of freedom in our choices but also guided us in ways that made the one act even funnier,” said Tess Buckley ’17, who was an actress in Mykrantz’s One Act this year. “He was always so fun and positive at rehearsals and even when we were beginning to get really nervous about being able to pull our One Act together, he kept it all together and pushed us to keep working.”

Mykrantz attributes his success to his enjoyment of all aspects of the performing arts.

“In comparison to running, I always liked the feeling I got after a run; however, during a run I was not as into it,” said Mykrantz. “With theatre from the auditions, to reading the cast list when it goes up, to the rehearsal practices, to going through tech week and then through the performances, I enjoy every part of it. There is not time when I am thinking ‘why am I doing this’ because I am always enjoying myself, and I think that’s a really special thing to have”.

High school director Steven Wrobleski, recognizes Mykrantz’s passion and believes it is why he has been able to thrive in the performing arts community. “Through his dedication, [Mykrantz] has been able to grow and improve so much since his freshman year,” said Wrobleski. “He is a brilliant leader and shows this not only on the stage but also off the stage when he directs and [serves as a] TA [in] one of my acting one classes.”

Mykranz’s creativity and humor transcends his acting pursuits. He serves as a confirmation advisor at his church, which allows him to apply the skills he has learned in acting.“As an advisor, [Mykrnatz] inspires people to be better versions of themselves,” said youth group member Kelly Min Crowley ’17. “He is a leader in youth group where everyone is drawn to his humor, compassion and intelligence.”

Mykrantz will attend Williams College in the fall of next year. While he does not plan on majoring in theater, he hopes to participate in some of the school’s productions.

SATIRE: New SAT: The reviews are in! 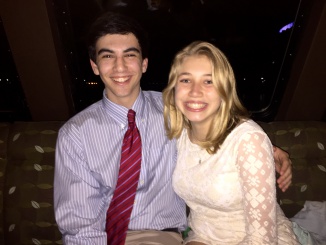