The following article is a part of a new installment at The Bradford, where students from Media Matters, WHS’ introductory journalism course, write on various topics pertaining to Wellesley and the world.

Colin Kaepernick, the former quarterback of the San Francisco 49ers, has been the figurehead of a controversial protest of institutionalized racism when he kneeled during the National Anthem before games.

Players across all NFL franchises have joined this protest by kneeling and raising their fists. Many Americans feel offended, believing that the protest is anti-American, while others support the players’ actions against racism.

Students across schools nationwide have protested the daily ritual of reciting the Pledge of Allegiance before NFL protests gained much media attention. However, with this new media attention about NFL protests, it is logical to assume that there will be protests in Wellesley.

In Wellesley, faculty and staff are preparing for possible demonstrations. Wellesley High School’s principal, Dr. Jamie Chisum, believes that students have the right to peacefully protest. “Our country allows us those freedoms,” Dr. Chisum explained. “People have the right as long as they’re respectful and not causing a scene.”

Jesse Davis, the head coach of the Wellesley High School Varsity team, agrees. “They absolutely have the right to kneel,” he asserted. “I would be disappointed, but I certainly understand the message.”

As a former member of the military, Davis is especially connected to the American flag, but understands that his players may feel differently. “Here at the high school level and for myself as a head coach, the flag is a symbol that I understand means different things to different people,” said Davis. “My America is different than that of a person of color; for me, [the flag] is something that is a bit more personal.”

Coach Davis is primarily concerned with keeping the players united as a team. “I’m not throwing anybody off the team or anything like that,” Davis assured. “The message of racial equality is very important, but anything that we do should be as a team and as a program.”

The coach’s sentiments are shared by a player on the Varsity football team, Carson Maconga ’18. “It’s not about making a show,” Maconga said. “The most important part of the anthem is to show togetherness with your team.” 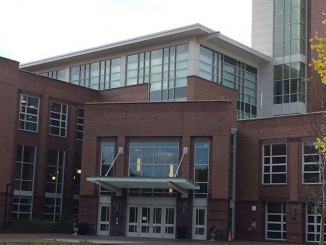 Media Matters: Dana Plunkett – a worldly woman changing the lives of many