A version of this article appeared on print in our November 2018 issue.

On October 6, the Senate confirmed President Donald Trump’s nominee for the Supreme Court, Brett Kavanaugh. The Senate vote followed a highly controversial series of hearings within the Senate Judiciary Committee, including testimony on September 27 from Kavanaugh and Dr. Christine Blasey Ford, a woman who accused him of sexually assaulting her when they were in high school.

The controversy surrounding these accusations captured the country. A deep dive into Kavanaugh’s high school past uncovered many pieces of questionable evidence: yearbooks, calendars, and letters from 1982 were made public. The most disputed information, however, was Kavanaugh’s character.

Was he a hardworking and respectful student-athlete who occasionally had a few beers with his friends to blow off steam, or was he an entitled stereotypical jock who tended to black out and sexually assault women? Politicians and the American people made up their own minds about Kavanaugh’s high school demeanor and thus his preparedness to be on the Supreme Court based on the limited evidence at hand. Our advice to high schoolers today: don’t give people a reason to question your character.

No matter how exemplary a student you are – Kavanaugh “busted his butt” to be number one in his class at Georgetown Preparatory School in Maryland – or how many varsity sports you play – Kavanaugh played basketball and football – your choices in high school, drug and alcohol related or not, can, and, as the hearing showed, will follow you into adulthood. Although Kavanaugh denied Ford’s allegations, he commented during his hearing that “in retrospect, I said and did things in high school that make me cringe now”.

Some chose to reject Ford’s claims on the basis of political bias or the opinion that the long period of time since the alleged assault limits the gravity of the allegation. Others argue that the accusation of sexual assault alone should be enough to eliminate Kavanaugh as someone deserving of a seat on the highest court in the nation. Despite what you believe, this much is definite: neither Ford nor Kavanaugh’s lives will ever be the same, and this accusation has played an enormous role in the job interview of a lifetime for Kavanaugh, which illuminates the long reach of one’s actions, alleged or not, in high school.

Many people assume that their actions in adolescence remain in the past. They think that even if any claim of misconduct from their high school or college years were to arise, it wouldn’t bear any consequences. This speculation has been proven false in Ford and Kavanaugh’s hearings, and is especially dangerous in today’s environment where heavy social media use leaves behind a technological footprint of each word or picture we share. Any post, even ones that were only intended as jokes, can come up in college applications, job interviews, background checks, and other career opportunities. 36 years from now if your character comes into question, society will not be forced to rely on calendars and yearbooks, but instead there will be a treasure trove of Instagram and Facebook posts, Snapchat stories, text messages, and more that will say far more about your character than any evidence presented during the confirmation of Justice Kavanaugh. We do not write this to scare you, but to warn you. Your actions today may very well dictate your life tomorrow, or your life years down the line.

In order to avoid the future unburying of misbehavior from their youth, students can consciously evaluate the content they are releasing into the world before every post, on social media or on paper, and try their hardest to be the honest, respectful people the world should recognize.

Certainly people may reject the notion that their high school lives will impact their careers decades later. After all, not every prominent person in Washington D.C. or elsewhere has been accused of sexual assault. Critics have even argued that “boys will be boys”, but at the end of the day, not every boy gets accused of sexual impropriety nor do they have a right to act like their adolescent years can be erased from memory.

For far too long, young men have had their actions dismissed simply because they’re boys and our society has somehow determined that there is some sort of impunity for certain actions of young men in particular. Sexual assault should categorically not be one of them. To people who supported Kavanaugh because of a lack of evidence: you are not in the wrong. But to anyone that believe the allegations enough to bring up the old boys club narrative: you are wrong. There is nothing manly about sexually assaulting women or taking advantage of them regardless of age.

Although Kavanaugh has been confirmed to the Supreme Court, his character was still very much up for debate within the Senate, with the vote to confirm him a close 50 to 48 with two abstainations. Regardless of their future ambitions, students can be certain that the repercussions of their actions, well or ill mannered, will affect them throughout their lives. 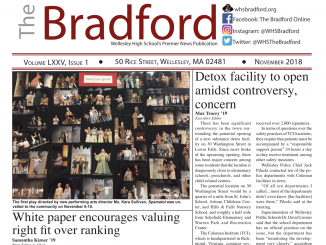