Over February break, the girls track and field team earned first place overall at the Division 2 States Meet at the Reggie Lewis Center.  Having put in work throughout the indoor track season and qualifying for states, this win allowed a few of the athletes to compete at nationals in New York City this year.

For much of the winter, high school track teams in the greater Boston area have competed in Roxbury, Massachusetts without needing to qualify.  Eventually, however, for an individual athlete or a relay team to advance to states, they must first qualify at the divisional meet.

Many of the girls on the team qualified for states at the division two meet by finishing in the top three in at least one event.  Luckily, there is no maximum or set number of spots available for one school at states, so ten girls qualified and competed, a considerably large amount from one school.

Abby Comella ’20 won the 600 meter race, Maggie Donahue ’19 came in second for the mile, Jojo Kennedy ’18 placed fourth in the long jump, and Anna Jordahl-Henry ’19 got both third in the high jump and fourth in the 300 meter race.

In order to win states, a team does not actually have to finish first for every event, but rather score the greatest number of points overall. For example, a first place win in a varsity event amounts to ten points, a second place finish of eight points, and this continues downwards.  The raiders scored the most points at states and some of them have in turn earned the chance to compete at the national level.

More than just a team, these athletes have continued to support each other as friends and fellow runners over the course of the season, especially during more high pressure or qualifying meets.  “Because the team genuinely enjoyed each other’s company we pushed each other more in practice,” said Ulian, who competed in both states and nationals.

Nationals for track and field are not connected with schools or school-run track teams. The athletes that both qualified and decided to participate in nationals this year travelled to the Armory track in New York but did not compete under the name of the high school.

“It is completely up to the athlete and their families if they want to compete at Nationals,” said Cassandra Short, the girls’ distance track coach.

Ten girls went to nationals after their win at states, participating in the mile, the 400 meter race, the high jump, the 4×400 meters, the 4×200 meters, and the 4×800 meters.  Some juniors and some seniors, these runners included Donahue, Comella, Jordahl-Henry, Kennedy, Kogon, Andrews, Ahonen, Freniere ,Ulian, and Julia Jordahl-Henry ’19.

Their team spirit and camaraderie has always been a top priority, and it has paid off in creating a successful, enthusiastic, and welcoming environment.

“This win highlighted all of the hard work that the girls put in all season. It was truly a team effort and took everyone supporting each other to come out victorious,” said Cassandra Short. 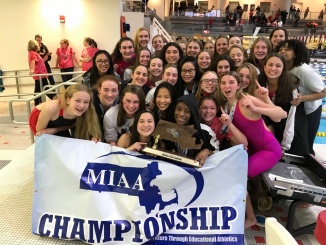