Gillette Stadium match is about more than just soccer

On October 2, the Wellesley varsity soccer teams faced off against Natick at Gillette stadium for two friendly matches as part of a program sponsored by the New England Revolutions which aims to bring local teams together at the stadium.

Wellesley started the game strong, with Ajajae McCracken-Bradley ’23 scoring off of a corner kick assist from team captain Yoav Feingold ’23. Later in the half, Natick scored a goal off of a free kick. At the end of the first half, the score was tied at 1.

The second half of the game was mostly played on Natick’s side of the field. Wellesley came close to scoring on multiple occasions, but the Natick defense left the final score tied. After the game, team captain, Connor O’Neil ’23, was able to see both areas for improvement and strengths in his team’s performance.

“It was definitely a fun experience [but] I felt like it could’ve gone better than a tie. The biggest thing we could’ve worked on was finishing. We had four or five opportunities that we kind of missed on, but if we work on that I think we will be good going forward. We had some good passes, we were able to link together some good passes, so we just gotta keep that up,” said O’Neil.

The girls’ team started strong, with Annie Comella (’25) scoring a goal off of a corner kick. However, Natick came right back to score a goal right before half time, tying the score. The game remained scoreless in the second half, ending the match in a 1-1 tie. 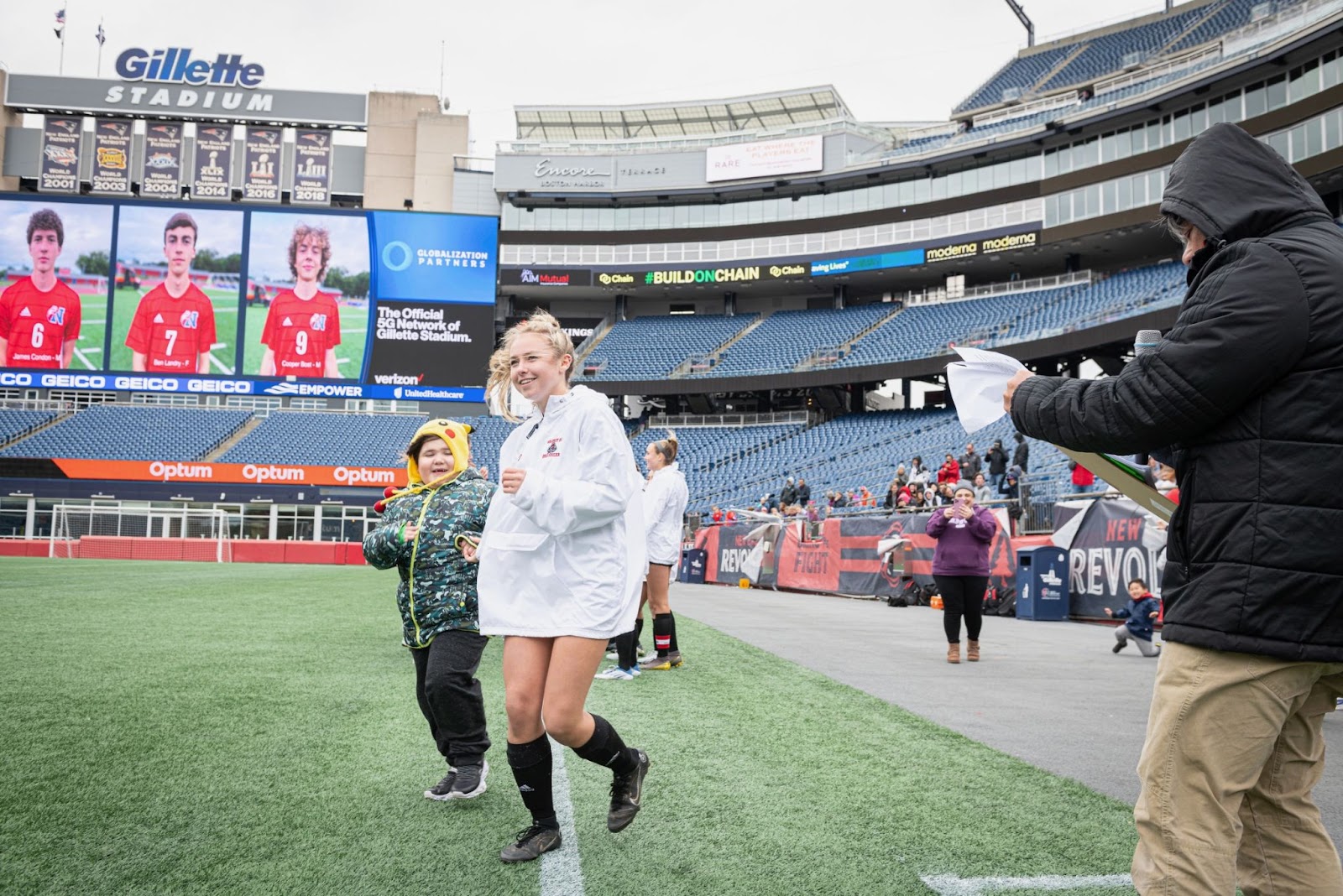 Katie Cunningham ’23 escorts a TOPS player onto Gillette field. The TOPS program has been helping students with special needs stay active for over 30 years. Photo courtesy of Allison Jones.

Allison Jones ’23 is Wellesley’s Varsity goalkeeper and a manager of the The Outreach Program for Soccer (TOPS), an organization which gives students of all ages with disabilities an opportunity to play basketball and soccer with high school students. She wanted to get these students involved in the game.

“We invited them to Gillette…and we have an opening ceremony…had eight seniors and eight TOPS players that came, so I paired up a senior with every TOPS player,” she said. “And when they called out the name…you’d go over to the sideline, you’d pick them up, and you’d bring them on the field with you for the national anthem…they were stoked.”

Being at Gillette stadium was also a unique opportunity which Jones appreciated.

“Seeing the huge stadium, even though it wasn’t filled with people, was so surreal. Looking around, I was thinking, ‘I am the luckiest soccer player ever, nobody in high school gets to step on this field and play where the Revs play’”