Four years after the tragic murder of his daughter, Dr. Malcolm Astley is taking a stand to promote healthy teen relationships, and, this Wednesday, he is coming to the high school to do so.

In July of 2011, Dr. Astley’s daughter, Lauren, was stabbed and strangled by her ex-boyfriend, Nate Fujita, who was eventually found guilty of murder in the first degree. At the time of her tragic death, Lauren had recently graduated from Wayland High School, just eight miles down the road from Rice Street.

Many students at Wellesley High School learned about the incident in health class when they watched CBS’s “48 Hours” documentary, “Loved To Death.” The documentary touched upon not only this case of break-up violence, but also the issue in general. Dr. Astley will speak with community members in the high school library at 7 PM on Wednesday.

Astley says that the broad goal of his visit is to work together on promoting healthy relationships, especially during break-ups, which he says are the toughest times in relationships.

“45 or 46 have died in Massachusetts (from domestic violence) since Lauren’s death about four years ago, and we just got to get on it together,” said Dr. Astley. “We have a history of tremendous progress, and it’s time to take this on together.”

Some students at the high school say that Dr. Astley’s program is specifically relevant to them, as they graduate and go on to college.

“An issue like that of course is always relevant but it’s especially relevant now as a senior going into college. I’ve definitely been following things at Columbia and other schools, and as a female, and as a person who’s going to be college it’s something that I’m worried about and aware of it so that I can better protect myself and better protect my friends,” said Lexie Lehmann ’16.

This is not the first time that Dr. Astley has worked with school communities in the Greater Boston area. According to the Memorial Fund’s website, the fund has “sponsored training for a number of school teams in that program, and the program has been well received at Wayland High School and Lincoln-Sudbury Regional High School.”

“You [school community members] are going about in a very thoughtful and comprehensive way,” said Dr. Astley. “I hope you all work on a plan that takes care of your needs, and can be a model to share with others.”

The Guidance and Counseling Department plans to work with the school community to promote visibility of the issues that Dr. Astley will discuss in his talk.

“The Guidance and Counseling Department will do more to help students process and help students really be able to process their feelings towards his speaking engagement,” said Mr. John Steere, a guidance counselor.

Steere says he commends not only Dr. Astley’s work, but also his resilience.

Members of the high school administration say that conversations like these effectively raise awareness of issues that may not be talked about enough.

Some students say they fully understand the importance of shedding light on these issues.

“It’s important to have these conversations because a lot of people, especially when they’re in those relationships, they don’t really notice and they don’t pick up the signs,” said Samantha Ngo ’16. “By being informed, they’ll be able to assess the situation and get themselves out of the situation if they have to.”

While Wayland is a few towns over from Wellesley, some students are familiar with Lauren’s friends and family. Anand Ghorpadey ’17, whose cousin was in the same grade as Lauren, says he felt personally affected by her murder.

“Bottling up is never good, and I think talking about it and understanding what happened are great tools to overcome horrible adversity,” said Ghorpadey.

Other community members, however, were more skeptical of the talk, and programs like it

“Thinking about the type of people that kill their significant others, I don’t think programs like these help. Domestic abuse among teenagers is a problem, but I don’t think the people that do that are going to be impacted by a program like this,” said Adam Shoulkin ’16. “It’s just redundant.”

Dr. Astley says that the fact that community members in towns like Wellesley are working together makes him hopeful for the future.

“Even though this is a tough tough topic, the fact that we’re beginning to get on to it together is a wonderful sign,” he said. “Once they (community members) are on the same page together, that’s when progress is really possible.” 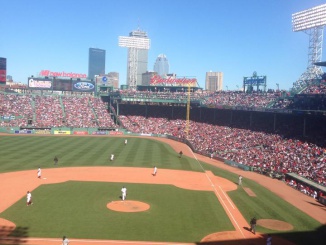