Two students concentrate on each other’s tone, eye contact, and physical movements while improvising through their scene. Their lines must build off the other’s actions, and the mood of the scene has to stay consistent. However, there is a fuzziness to the actions and a lag to the voices due to the screen between them.

Although in a new and unfamiliar setting, students still use their performing arts learning to maintain their creativity.

“By having these classes, it has given students a creative outlet and connection to the school. Many of the students in our ensembles have participated together for several years, so they help students connect as well as create,” said Mr. Michael LaCava, head of the Performing Arts department.

Likewise, Mr. Matthew Ryan, the Acting department teaching assistant, also credits the online classes for helping him use his creativity and maintain his connection to others, especially at a time that permits minimal social interaction.

“I’m much more of an extrovert than an introvert, so these classes help me stay engaged and have one more thing to look forward to during the day,” said Ryan.

The performing arts classes face a difficult task with remote learning since a majority of the activities and learning depend on interacting with the people around a performer.

“It is not easy. Acting is so intrapersonal, and it is hard to not have that close interaction and eye contact,” said Drama Specialist Ms. Kara Sullivan.

“We talk more in-depth about scenes and walk through what would happen in a scene through words, rather than actions,” said Sydney Spangler ’21, an Acting 3 student.

Additionally, many groups within the Performing Arts department started their own creative projects.

“We are also seeing many different creative ideas within the department, such as an online show from our Drama department and a collaborative musical performance between our choir, orchestra, and band program,” said LaCava.

In addition to the current projects, Sullivan hopes that the ongoing situation will continue to influence the work of the students, inspire creativity, and further learning outside of the classroom.

“Allowing the kids to use what is going on to inspire some of their work has been helpful and therapeutic. With the free theatre and art opportunities all over the internet, students are becoming more appreciative of how the arts are so instrumental in our everyday life,” said Sullivan. 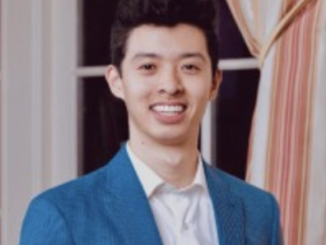 Tony Shu: the Wellesley legacy attributes part of his success to the town